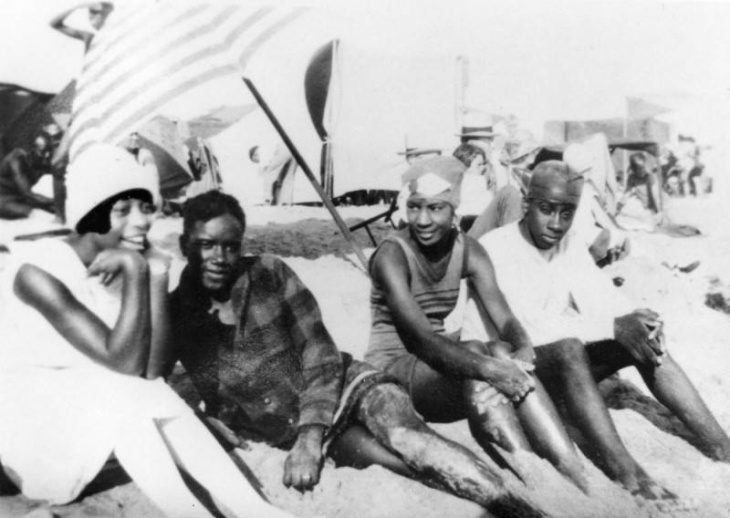 Our news is free on LAist. To make sure you get our coverage:Sign up for our daily newsletters. To support our non-profit public service journalism:Donate Now.

In the 1940s, Nick Gabaldón, an athletic, handsome student at Santa Monica High School, would often escape class to Bay Street Beach, a half-mile stretch of shoreline roughly between Pico and Bicknell Streets, by the Casa Del Mar hotel. Derisively called “the Inkwell” by some white Angelenos, Bay Street Beach was a haven for people of color.

Here, Gabaldón would bodysurf for hours, impressing two white lifeguards who loaned him a rescue board. With this heavy, 13-foot board, Gabaldón taught himself to surf, becoming the first documented Black surfer in America. He eventually took to riding the waves in Malibu, paddling six miles north and another six miles back, because he knew he would not be welcome walking on most of Santa Monica’s beaches.

From the 1910s to the 1960s, Bay Street Beach was a recreational center for people of color. Although restrictions keeping African Americans off Southern California beaches had been struck down in 1927, Black people often faced discrimination and abuse when they ventured onto L.A. County beaches. Many chose to go to Bay Street for safety, comfort and community.

Today, a small marker honors its place in California history as well as the legacy of Gabaldón, who died in a surfing accident in 1951. In 2019, the 53-acre Bay Street Beach was recognized as a historic district by the National Register of Historic Places. But Bay Street Beach represents a fraction of Santa Monica’s African American legacy.