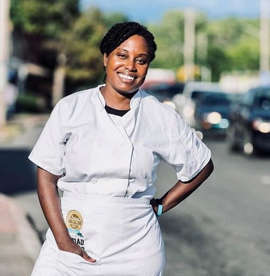 With no events or weddings to cater and farmers markers and other artisan shows cancelled, 80 per cent of the Ottawa company’s revenue dried up and like many Black restaurant owners, Solomon-St.Lewis was worried about the future.

“We were looking at our existing business and thinking this is not going to survive,” she recalled.

“I don’t think that any Black or minority-owned businesses would necessarily expect… and I didn’t expect anybody to come to my rescue.”

Black entrepreneurs say that feeling stems from years of being underfunded and facing extra challenges in an industry notorious for low margins, high staff turnover and long hours.

They say the pandemic has made things even tougher and predict that it could be months or even years before they recoup lost earnings, but they’re bent on not letting the health crisis get the best of them.

“Black business owners have a hard time accessing capital when it comes to even just starting up their business, and so oftentimes we find that food operators, in addition to owning restaurants, start out with a catering business or as a food truck,” said Warren Luckett, a co-founder of Black Restaurant Week, which makes its debut in Toronto on Friday.

“Now one of the largest things that we’ve been seeing is a labour shortage, being able to find and retain quality labour.”

The trio wanted to support Black businesses, so they designed 10-day periods where participating Black-owned restaurants offer specials. Most restaurants saw an increase in sales between 15 and 25 per cent and others reported the event triggered their best week in business ever, Luckett said.

Restaurants Canada estimates that more than 800,000 Canadian workers in the sector lost their jobs or had their hours reduced to zero during the health crisis.

The industry lobby group said as the government’s rent and wage subsidies are scaled back this month, most restaurants will struggle to pay staff and suppliers and at least half will have to consider closing down permanently.

Femi Folorunsho’s Brampton, Ont. business Kejjis is participating in Black Restaurant Week after being hit hard by the pandemic.