Terisa Griffin affectionately called, “The Empress of Soul”, is an exciting entertainer, song writer, actress, producer, and philanthropist. The daughter of a Baptist minister and the second of four singing girls – her passion for family, music and giving back influence her life. She never disappoints or ceases to amaze her audience.

After being mentored by Chicago’s Own Jerry “Ice Man” Butler, Terisa landed national exposure singing backup for Diana Ross on an “Oprah” telecast. Through her production company, My Naked Soul Productions, Inc., Terisa wrote, produced and stared in a series of “One Voice, One Woman” shows and she has successfully produced three albums. Terisa made her acting debut in Director Hill Harper’s movie “The Truth” and she wrote the title Song for the movie “Can’t Stop Loving You”.

Griffin’s Newest CD “Revival of Soul”, hits stores on November 6th. It is a Testament to Soul Music. The much anticipated CD by Griffin is sure to ignite a Revival in the Soul of all who experience the sensual, soulful, sizzling cd. Known on the scene for her electrifying voice and dynamic live performances, Griffin has enraptured audiences and followers through her music internationally. A former contestant of Season 3 of NBC’s “The Voice”, she is treating attendees to a live performance of her fourth studio album, “The Soul Revival”.

Through her production company, My Naked Soul Productions Inc., she has successfully written, produced and starred in a series of one-woman show productions. These shows featured: One Voice, One Woman, Fantasy-A Tribute to the Divas of Song and Stage: Josephine Baker, Lena Horne, Billie Holiday, Ella Fitzgerald and Sarah Vaughn, Queens of R & B- A Tribute to the Queens of Rhythm and Blues: Dinah Washington, Diana Ross, Aretha Franklin, Donna Summers and Tina Turner, and Songs Divas – A Tribute to FamousSong

Audiences in her adopted home of Chicago as well as the city’s lucrative, jingle industry are in a passionate love affair with the gifts she has to offer. She performs to both local and national venues around the country. With her unique style, Griffin has opened up concerts for the biggest names in music that includes: Will Downing, Crisette Michelle, The O’Jays, Roberta Flack, Patti LaBelle, Rahsaan Patterson and Musiq SoulChild- just to name a few.

“Life is too short to have regrets and to long to not try to pursue your hearts true dreams and desires”. This Louisiana Native who moved to Chicago to pursue her hearts dreams and desires keeps reinventing herself and truly surprising and satisfying her fan family. Terisa is an example of living your dreams at all cost. “There is simply no emerging singer in the soul music world quite like Terisa Griffin.” Quote from Chris Resnik of SoulTracks.

Although, Terisa has graced the stage with some of the nations greatest, her life journey and music inspired her to reach deeper into the lives of those she touched, which resulted in the creation of BETTER LOVE YOURSELF, Inc. This non-profit organization was created in 2007 to develop the road map for young adults to master the art of loving and caring for themselves. Her dream is to fill the trunks of every inspired student who would like to attend college because “a mind is a terrible thing to waste” and a dream is a pearl waiting to be defined. In 2016 Griffin will celebrate 10 years of giving out trunks to over 2500 students going off to college. When Terisa dreams she truly dreams big and executes to the stars and back.

Terisa’s Revival of Soul Tour is coming to a city near you, and this is one concert you do not want to miss. Terisa’s raw honesty, soulful, passionate voice, and heartfelt story will be like a refreshing cool drink for your thirsty soul. 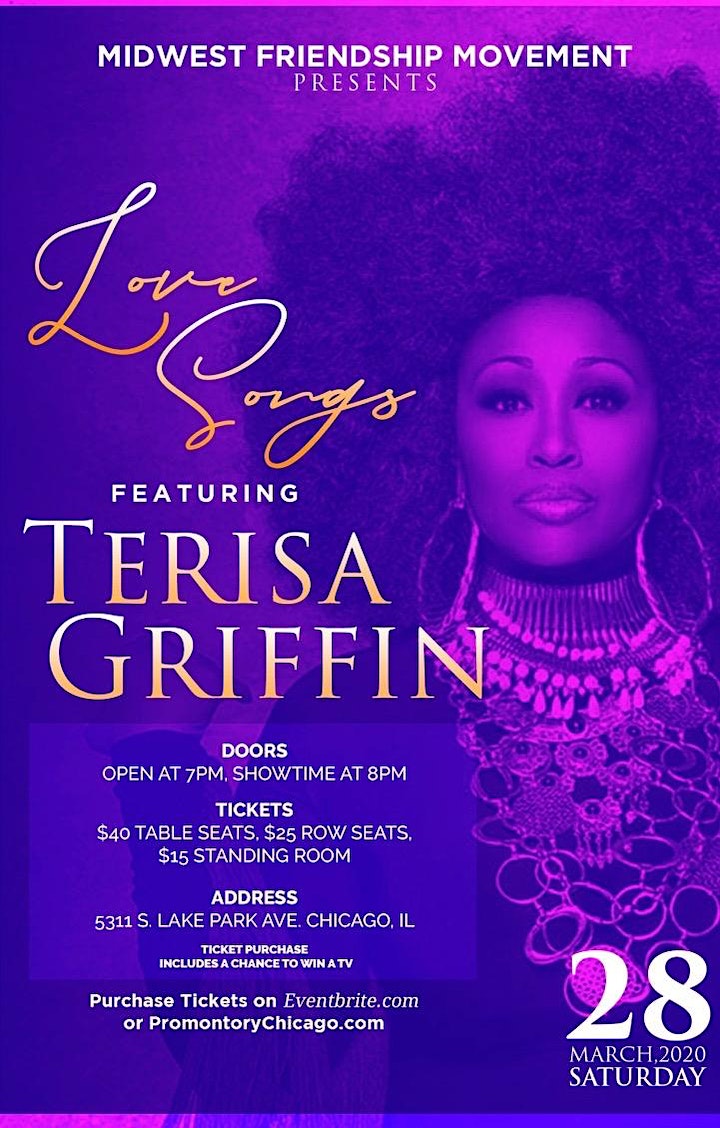 © 1999-2022 Urban America Lives for Entertainment | Designed and Maintained by CatchingEyesMedia.com